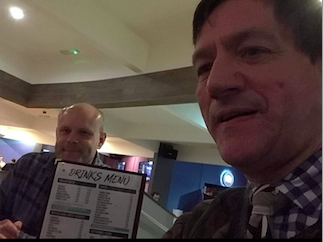 During November 2021, Josh and Ambassador Andrew were talking to members about Movember!

Andrew describes Josh’s story as one of hope and recovery, calling him ‘a very brave man’ after battling two rounds of testicular cancer.

The idea of masculinity was discussed a lot in relation to testicular cancer. Initially Josh had asked himself ‘was this experience going to wreck my masculinity?’ but instead he said it was a journey of ‘redefining masculinity’. He says he knows himself and his body better and ‘I’ve learned that I’m no less of a man.’ During the event Andrew reiterated to Josh by saying “it takes a man to be sensitive”.

Josh stated that by “not removing the problematic stigma of masculinity, like being macho, and not talking about your health issues, you could end up being dead.”

Members thanked Josh for telling his story, such a powerful story Josh, and asked questions around support and dealing with mental health alongside physical.

Josh talks to get2gether about how important it is to be aware of cancer.

When did you realise there was cause for concern? What was different?

I first noticed a huge swelling around my right testicle when I went to the toilet. I was quick about going to the doctors. The following year it returned to my remaining testicle in the form of a tiny tumour which was able to be zapped off with radiotherapy. However it was decided it was best to remove the whole testicle as removing the tiny tumour puts you at risk of needing to rush back to hospital as a result of the testi bursting and causing internal bleeding.

Can you tell our member a bit about testosterone replacement therapy which you receive?

For the testosterone replacement therapy I had to start out with gels. One of the Doctors explained going straight injections and not bothering with gels puts you at risk of a stroke to the brain and blood clots to the legs but eventually I moved onto injections.

Do you have a message for any members reading?

My message for young readers is get it checked immediately through a GP then Doctors and nurses and no waiting as it’s very serious and important. Check yourself often. Testicular cancer usually affects young men, which I didn’t know about, and so it’s important to check and get checked for lumps and tumours.