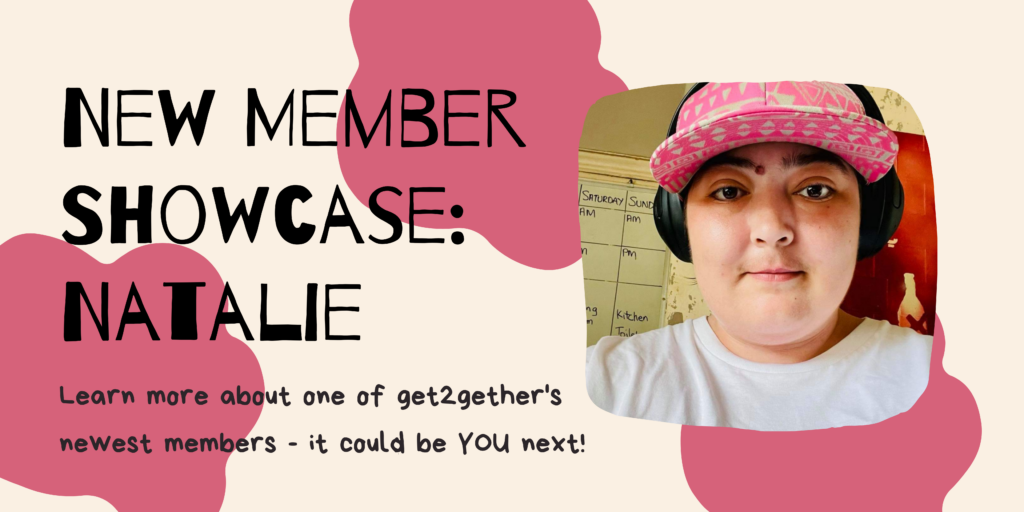 How have you found being part of get2gether?

I’m really enjoying being part of get2gether – it’s given me a lot more confidence and I’ve been more willing to try new things, even things that scare me! I’m also learning a lot, which I love. I’ve learned so much on the ‘Let’s Talk about Sex’ and ‘Live your Life’ courses. I’ve been able to ask questions (I’ve never been able to do that before!) and I’ve also learned a lot about myself at the same time.

Which projects are you involved in?

I’m doing the ‘Live your Life’ course, Space Gang talking about space and planets on facebook live and I pretty much try to sign up for everything and anything because I want to be as involved in everything. I’m co-facilitating a session this month with Ambassador Katrina on Autism and Women, I’m nervous but very excited.

What has been most exciting?

Knowing that I don’t have to try to act differently or be ‘normal’ – I can just be myself. I also like that everyone is so friendly and welcoming and no one is going to judge you or bombard you with 101 questions. You’re accepted for who you are, straight away.

What has been most nerve-wracking?

Going on zoom and not knowing anyone, knowing people can hear and see you can be intimidating at first. People knowing each other but you not knowing them is a bit scary but it gets easier with everyone being so friendly.

What have you been working towards?

A lot of things! I’m not the best at socialising so trying to stay in social situations and trying to get to know people better and working on social skills. I’ve also been working on taking public transport – it terrifies me. I don’t like anything about buses – the people, the noises, everything about it – so I’ve been trying to get more buses and go further and further out of my comfort zone because I want to be able to go to the ATIK nights out when they start up again. I’m planning on travelling through to Edinburgh from Glasgow – hopefully on my own – and I’m going to practice by coming through for the pop up on the 17th. It’s a big deal for me and I’m determined to get there.

Get2gether has really helped me, a lot. I’ve only been a member for three months and it feels a lot longer, in a great way; doing events, talking to other members, sharing experiences. It makes me want to push myself to do more, to do things I wouldn’t normally do. I want to build up my skills to be able to get through to Edinburgh, even in small steps, even if I get there and have to get back on the train, at least I know I can do it so maybe the next time I go further.

What advice do you have for new members?

Sign up for as many events as you can or feel comfortable because even if it means sitting with your camera off at first. Everyone is so friendly and nobody will put you on the spot or pressure you to talk if you don’t want to. Come along and listen in to see how it works and if you would enjoy coming back. I was scared at first so I kept my camera off but everyone was so nice – staff, ambassadors, peer mentors and other members – that it wasn’t long before I took part in the zooms fully.

I would say try not to be scared to ask questions. I always worry that I ask too many questions or that I’m going to annoy someone but honestly, ask as many questions as you can because, as lots of people keep telling me, there’s no such thing as a stupid or a daft question. When you do ask questions, if you don’t understand something, there are always people that are willing to take the time to explain something to you. It doesn’t matter how many times or different ways, they’ll explain it as many times as you need.

Finally, try to come along to the Monday magic meeting! That way you get to know faces and who’s who. It means you can know what’s coming up, have a say in how the week’s going to look and also the more you’re there, the more you can contribute!